An Umrah trip feels incomplete without spending time in Madinah, the second holiest city in Islam. Affectionately named “Madina Al-Munawarrah” in Arabic, it means “the Enlightened city” as it played a pivotal role in the life of our beloved Prophet Muhammed (Peace be upon him).

Located 450km away from Makkah, many pilgrims spend the last days of their Umrah or Hajj trip in Madinah. There are a number of significant sites in this city including the Prophet’s mosque where the Prophet (Peace be upon him) lived and taught following his migration from Makkah in 622 A.D., called “the Hijrah”.

Madinah is home to many other pious sites that include some of the historic mosques on one hand, and museums, hills, and shopping spots on the other.

Top 12 places to see in Madinah

Ready to make your trip to “The Enlightened City”, a memorable one? Map out your itinerary with our guide to the top attractions and places to see in Madinah. 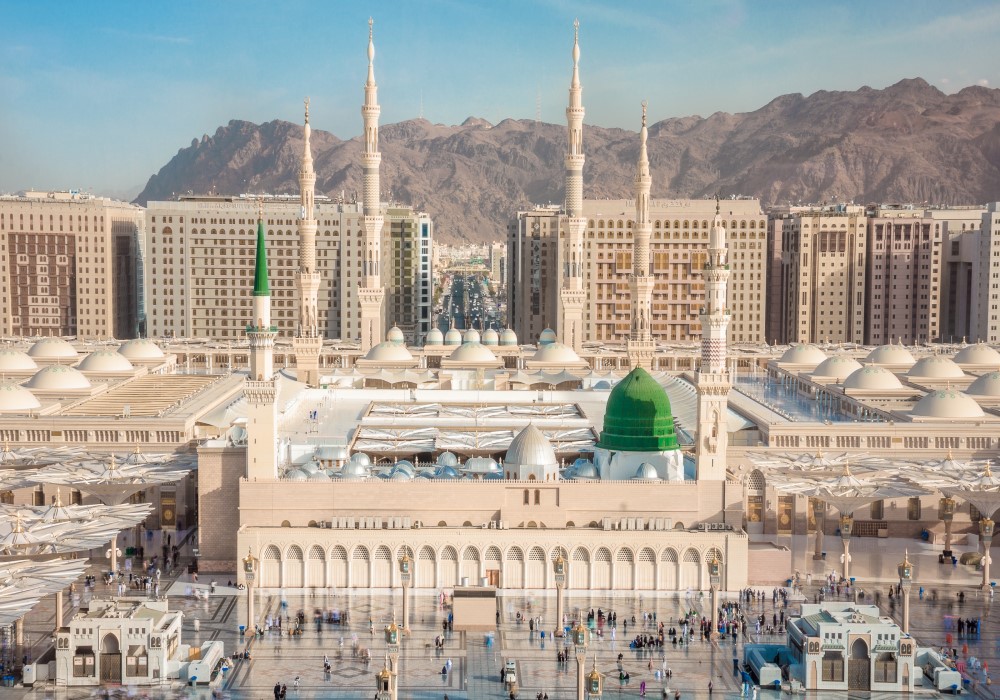 Al Masjid Al Nabawi is the most sacred place in the whole of the city. This stunning 10-minaret masjid is also called “The Prophet’s Mosque” because it was built by order of the Prophet (Peace be upon him) after he migrated from Makkah and lived and taught there for quite some time serving as its base of operations and as the cradle of Islam.

This Masjid can accommodate 1 million visitors and can be visited at any time of the day or night. It is not only a prayer place but houses many other holy sites such as the Prophet’s tomb located under the mosque’s green-colored dome, Rawdah ash Sharifah, or the Noble Garden, and the Minbar where the Prophet (PBUH) gave his sermons.

The Masjid is brimming with intricate architecture on the walls, gates, and ceilings which you can explore around.

Be sure to catch the convertible umbrellas opening and closing during dusk and dawn in the Prophet’s courtyard for a wholesome experience. 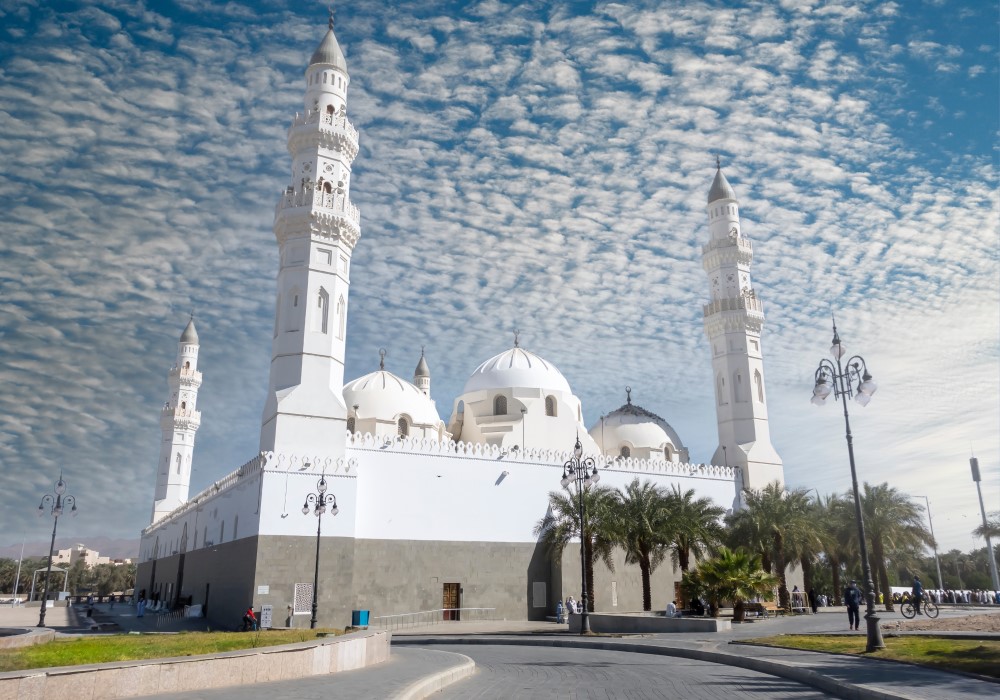 The oldest mosque in the world, Masjid Quba, is among the most famous and spectacular sights in Madinah. It was here where the Prophet Muhammed (peace be upon him) and his companions laid the foundation stone of the world’s first mosque.

In terms of its architecture, Masjid Quba stands out as a striking example of intricate design with its elaborate entrances, parallel minarets, colossal domes, marble-adorned courtyards, and prayer halls. 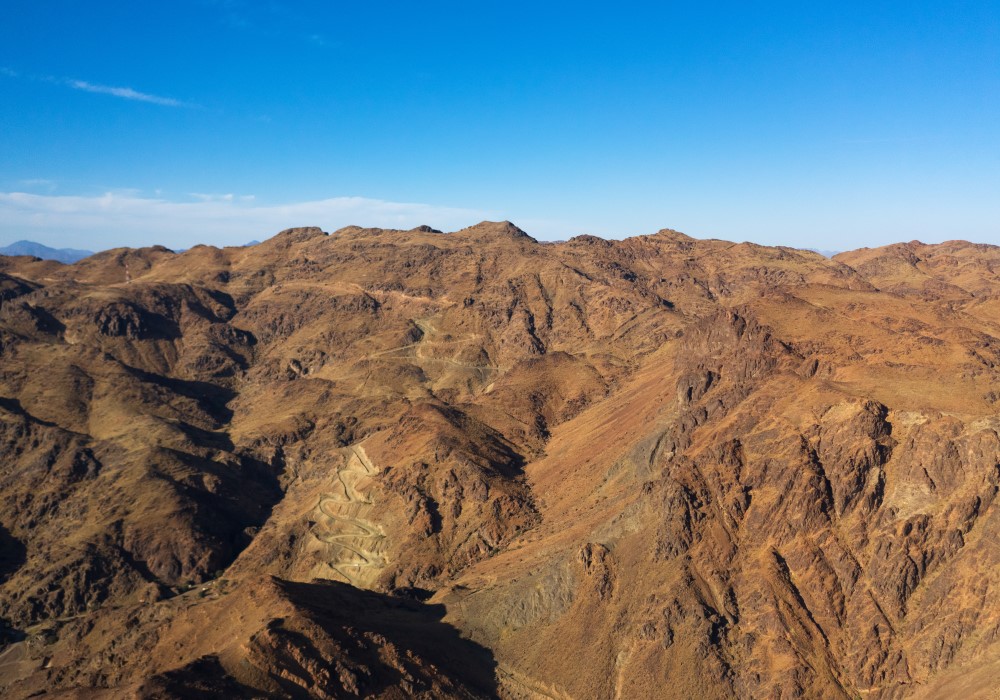 Pilgrims come here to learn about the history of the battle, how the Prophet (PBUH) and his followers fought against their enemies, and how it changed the course of the Islamic history.

You can also take a guided tour to hike around the mountain and explore the scenic valleys of Uhud.

Madinah’s oldest and largest cemetery, Jannatul Baqi, is located next to Al Masjid Al Nabawi and stretches to up to 175,000 m2.

Locally known as Baqi Al-Gharqad, this significant Islamic site is where most of the Prophet Muhammad’s (PBUH) family members along with several companions have been buried, believed to be around 10,000 graves.

You can take a guided tour to walk around the cemetery and learn about the rich Islamic history.

Masjid Al Qiblatayn is popularly known as the site where the Prophet (PBUH) received the command to change the direction of prayer (Qibla) from Jerusalem to Makkah. Due to which, the masjid is also called ‘The Mosque of the two Qiblas’.

The Masjid was built by Sawad Bin Ghanam Bin Kaab in the year 623 CE and it is the only mosque in the world with two mihrabs that indicate the direction of prayer.

Pilgrims visit Masjid Al Qiblatayn not only for its Islamic significance but historically, it is one of the oldest masjids in the world. Take time to visit this mosque during prayer times especially during Maghrib prayer, for a blissful and soulful experience. If you’re in Madinah, you should check out the Mosque of Al-Ghamama, a significant religious site with a fascinating story and history. It is believed that the Prophet (Peace be upon him) offered Salat Al Istisqa (prayer for rains) in this masjid due to extreme drought, and clouds appeared immediately leading to a heavy downpour.

Located in closer proximity to Al Masjid Al Nabawi, you can walk around and explore the historical site.

One of Saudi Arabia’s biggest tourist attractions for history and culture is Dar Al Madinah Museum. The museum is about 20km from the main city of Madinah, in the Knowledge Economic City (KEC), which takes approximately 20 minutes to reach.

It exhibits around 2,000 rare artifacts that capture the heritage and culture of Al Madinah. Expanding among 14 galleries, each gallery highlights different sections like history, religion, culture, and art. If you’re an explorer and a history buff, then this place is for you. Dated back to the Ottoman era, this railway station turned museum is a treasure trove of artifacts extending from the time of Prophet Muhammed (PBUH) to the Ottoman era. It was designed mostly to ease pilgrims’ journey from Damascus (Syria) to Makkah and Medina but fell apart due to unprecedented events like World War I.

Visit the intricate Hejaz railways line and learn how the massive transportation system was managed during that time and also, you can find age-old train engines and other historical artifacts to explore.

Located in the heart of the city, Al Noor mall is a vibrant shopping mall, just 15 min away from Al Masjid Al Nabawi. The mall offers a wide range of high-end branded outlets like Zara, Gucci, etc fun gaming sections, food courts, and a relaxing ambiance with a lot of hospitality.

As the name suggests, the seven mosques are a group of mosques built in the vicinity of the famous battle of Khandaq, also called ‘the Battle of the Trench’. During the historic war, the Prophet (PBUH) and his followers dug trenches to defend the city of Madinah from the Quraish and their allies.

Located 5km from Al Masjid Al Nabawi, many pilgrims visit this popular tourist attraction and learn about its fascinating history.

In the entire history of Islam, the first and most historic battle has been the Battle of Badr, where 313 Muslims, including our Prophet (PBUH) fought against 1000 men from the Quraish tribe. With the help of Allah, our Prophet and his army won the battle.

The small town of Badr where the battle took place is on the outskirts of Madinah, about 135km from the main city. You can easily book a private taxi and visit this site. You can check out the valley and mountains in the Badr area and learn the historical win of our Prophet during the battle. If you have enough time to stay in Madinah, make sure to include Yanbu beach too in your itinerary.

Yanbu city is 231km from Madinah and 160km from Riyadh. It is a scenic city with desert and sand dunes on one side and the gorgeous Red Sea on the other. This beachy city will lead you to Yanbu beach where you have plenty of options to stay, to dine in and indulge in leisure activities for you and your family.

Madinah is a beautiful city with lots of attractions to visit and see around including a bird park and dino park. We have compiled the following 12 places for you so that you don’t have to miss out on any religious or significant sites while exploring the city and returning home with memories to cherish.

Quick Snacks and Fine Dining: The Best 10 Restaurants in Madinah

For more information on Umrah, get in touch with us. Visit Umrahme

Tags:
Previous Article
5 Best Hotels with a Grand View of Al Ka’aba
Next Article
Shopping in Makkah: Top 7 things to buy when there

Abu Bakr: The Companion, the Trustful, and the Successor
umrahme Team November 18, 2022

Abu Bakr: The Companion, the Trustful, and the Successor

Shopping in Makkah: Top 7 things to buy when there
umrahme Team December 11, 2022